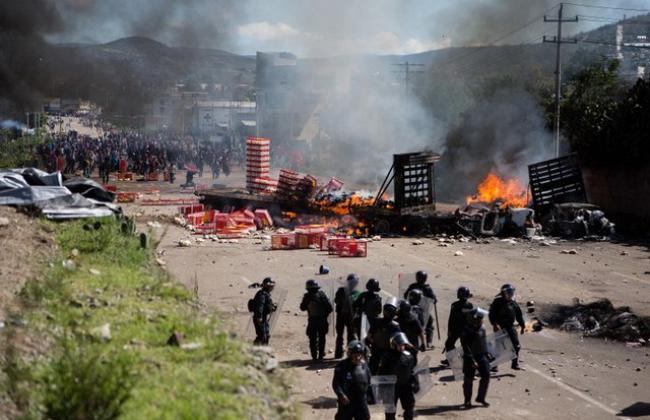 Oaxaca, police shot and killed eight people in Nochixtlán, including a professor of indigenous studies and a teacher’s son, and wounded 45 others by gunfire. Twenty-two people have “disappeared” after the attack.

On Sunday 19 June 2016, Mexican police forces opened fire against teachers and civil society organisations that were protesting against educational reforms in the state of Oaxaca. Eight people have been killed, 51 injured and 21 arrested. Additionally, one journalist was executed while covering the protests and seven people are reported as disappeared. Diverse civil society groups in Mexico have issued statements (one in English) that bring light to the context of the attacks and re-centre the work of the teacher’s movement.

Several APC members and partners from Latin America and the Caribbean are currently attending the OECD Ministerial Meeting on the Digital Economy in Cancun. “It is extremely hard for Mexican civil society delegates— possibly for all Mexican delegates— here at the OECD ministerial to focus on discussions on the digital economy with what is happening in Oaxaca in the foreground. Online and offline realities are connected. We cannot talk about trust and security on the internet without considering the loss of life resulting from lack of trust between citizens and the state, between communities and law enforcement,” said Anriette Esterhuysen APC Executive Director from Cancun.

For Gisela Pérez de Acha from the Mexican office of APC member Derechos Digitales, “This event is yet again another manifestation of the severe human rights crisis that Mexico is going through. It permeates every aspect of society, online and offline. We express our full solidarity with the victims of the police repression and all our thoughts are with their families and friends. This problem cannot be isolated from the OECD Ministerial meeting happening right now in Cancun; economic and technological growth cannot be achieved without proper inclusion and defense of dissidence, diversity and the right to protest.”

“This raises a question about the global Internet Governance Forum in Mexico later this year. Human and democratic rights violations by the Mexican need to be addressed. The US-supported Mexican military and police are now escalating their attack on the people and working class who struggle for justice and human rights” said APC member, Steve Zeltzer from LaborNet, based in California.

APC member in Oaxaca, Rhizomatica provides mobile connectivity to rural communities in the region and has been directly impacted by confrontations with state forces. Rhizomatica’s Peter Bloom said, “Pro market educational reform and the digital economy, in other words “surveillance capitalism”, are part of the same trend of dispossession by the state and corporations. People in Oaxaca are standing up to this on many fronts but the repression can no longer be ignored.” APC member in the US and Mexico, May First/People Link, issued their own statement condemning the state for its actions.

APC stands in solidarity with the people of Oaxaca, the teachers’ movement, our members in Mexico and our colleagues in Mexican civil society at the OECD Ministerial Meeting.