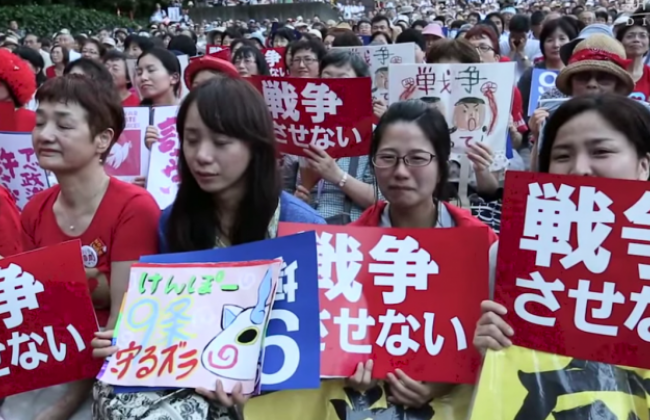 Japan's ruling coalition, led by Prime Minister Shinzo Abe, cut off debate and pushed the Legislation for Peace and Security through the House of Representatives’ special committee on security legislation on July 15, 2015.

This paves the way for the legislation to be passed into law later this summer. Once passed, the Legislation for Peace and Security will greatly expand the overseas role of the Self-Defense Forces and allow for Japan to exercise its “right to collective self-defense” and participate in military operations with other countries such as the United States.

In order to avoid a lengthy constitutional revision process that could affect the outcome of the Upper House elections next year, Japan's ruling coalition has sought to “redefine” military deployment in terms that are somehow compatible with Japan's Peace Constitution.

At the beginning of July, in an interview with Shingetsu News Agency‘s Michael Penn on behalf of the Foreign Correspondents Club of Japan, Japan Communist Party Leader Kazuo Shii remarked that Japanese legislators were “debating concepts here that are used nowhere else in the world:”

[…] The most amusing example that Shii posited was the Abe government’s concept of “the use of weapons.”

The prime minister argued in Diet debate that should the Self-Defense Forces come under attack while providing “rear area support” for a foreign military force, that it would be perfectly allowable that they have recourse to “the use of weapons” to defend themselves.

At the same time, however, Prime Minister Abe staunchly refuses to acknowledge that “the use of weapons” can be regarded as a practical synonym for “the use of force” – which is, of course, explicitly banned by Japan’s Constitution.

Public support for the ruling coalition, made up of the conservative Liberal Democratic Party (Japan's “natural governing party”) and junior coalition partner Komeito, has plummeted because of new security legislation.

It has been noted there are similarities between Shinzo Abe's efforts to pass the new security legislation and his grandfather Nobusuke Kishi, who worked to sign a revised security treaty between the United States and Japan in 1960.

Riots broke out in Tokyo in January 1960 when the new Kishi-backed Japan-US security treaty was signed. Six months later Kishi, also a former cabinet minister in Japan's wartime fascist government, would be forced to resign due to his unpopularity.

There is some anticipation that Shinzo Abe himself may be forced to resign himself before long to take responsibility for the unpopularity of the new Peace and Security legislation prior to the 2016 Upper House elections.