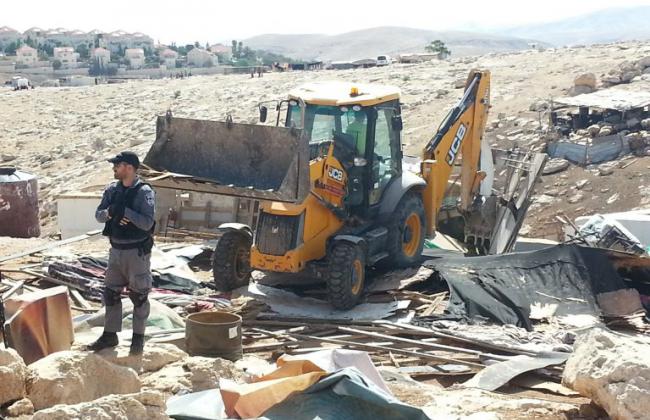 JCB equipment in use by the Israeli army during the demolition of the Palestinian Bedouin village Abu Nuwar, a neighbouring village to Khan al-Ahmar, July 2018. Photo credit Corporate Occpation.

This month, the village of Khan al-Ahmar in the occupied West Bank is due to be demolished by Israeli forces, in an action classed as a war crime under the statute of the International Criminal Court. Campaign group Corporate Occupation is calling for British company JCB, whose machinery is used by the Israeli army, to be held to account.

After a ten-year battle to save their homes, the residents of Khan al-Ahmar face forcible eviction and displacement. The local school, which provides an education for 170 children from five different communities, is also set to be demolished. ‘This act is not only heartless and discriminatory, it is illegal’, Saleh Higazi, Amnesty International’s Middle East and North Africa Deputy Director, has said. ‘The forcible transfer of the Khan al-Ahmar community amounts to a war crime’. The Israeli government says that the village was built without the proper permits, but according to the inhabitants these have been made impossible to obtain.

The British company JCB continues to sell its products to the Israeli military, and their use in the illegal destruction of Palestinian settlements has been well-documented for years. ‘The UN Human Rights Council has repeatedly stated that companies must terminate all business involvement in Israel’s illegal settlement activity’, says Ryvka Barnard, senior campaigner on militarism and security at War on Want. Companies such as JCB are ‘directly supporting the destruction of Palestinian homes and schools’ and are ‘profit[ing] from illegal activity – and in this case, war crimes’.

Campaign group Corporate Occupation are calling for action to be taken to hold JCB to account. You can: