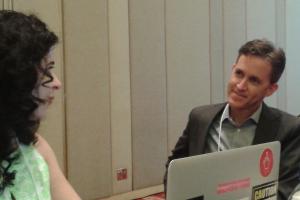 By Leila Nachawati Rego for APCNews

APC interviewed the UN Special Rapporteur on the promotion and protection of the right to freedom of opinion and expression. David Kaye, who just published a report on the importance of encryption and anonymity for human rights, gave the opening keynote address at the Regional Consultation on Expression, Opinion and Religious Freedom in Jakarta (Indonesia) on 3-5 June.

APC welcomes Kaye’s efforts, which present a significant opportunity to strengthen fundamental freedoms in the digital age, and has contributed to his consultation. Our comments included corporate responsibility, women’s rights and sexual rights, and supported tools that protect privacy and anonymity online.

Your recent report to the Human Rights Council mentions that corporations have a role in preserving the right to freedom of opinion and expression, but it does not get into details of their responsibilities. Will you be following up on this in upcoming reports?

Yes, the roles and responsibilities of corporations are a priority and we will be developing a strategy to follow up on this during the summer. This will be developed through two different tracks: on the one hand, we will be paying visits to several corporate actors – from Silicon Valley to private sector representatives in South Asia, China, and Europe – to pursue/convince them to adhere to principles like the Global Network Initiative’s, and other mechanisms to implement their human rights obligations. On the other hand we will work on thematic reporting on the role and responsibilities of the corporate sector.

Sexual expression is not seen to be as important as religious or political expression. What can we do to promote its inclusion as a free speech issue and to build alliances among free speech advocates and gender activists?

There are different ways to look at this. One is to reframe the issue of sexual expression within the language of Article 19 of the Universal Declaration of Human Rights. It can also be framed within the Right to Health. Can there be shared ground between my mandate and the health mandate? We should find ways to use the existing law and resources to advance these kind of issues.

It is not like this tension has been solved at the international level, but it is definitely easier to deal with than at the national and local level. Taking international themes and “selling” them nationally is crucial in our strategy, I think. Many power structures and institutions at national level will of course oppose, but we need to find the coalitions at national levels where these issues can be advanced, and convince them to strategise around the idea that freedom of expression enhances their rights.

The answer is, on the one hand, more speech. But also, freedom of expression is fundamentally anti-power, and we want to ensure that we react to its instrumentalisation by the powerful. Power structures will continue to use freedom of expression to their advantage while they repress people’s exploration of new ideas that may threaten them. We need to work on finding more ways to respond to this and counter it.

Reposted under  CC BY-NC-SA 3.0 with many thanks from: