In 1985, a bunch of environmental activist techies worked together to devise tools that would support networking efforts within the green movement. They called the operation "GreenNet". Soon, GreenNet began collaborating and exchanging information with similar networks in other countries, such as PeaceNet and EcoNet.

In 1990 the Association for Progressive Communications (APC) was formed by these networks. The APC currently has 45 member networks serving over 50,000 activists, non-profit organisations, charities and NGOs in over 133 countries. The APC is committed to supporting international links with Southern member and partner networks.

For many years GreenNet provided an international gateway for small, indigenous networks in African and Asian countries. The gateway supported email exchange between the internet and 52 networks in Africa and Asia – sometimes the link being the only means of electronic communication for NGOs and other organisations in those countries.

More than 20 years on, we now have a technology landscape in the UK which provides most people with easy access to electronic communications. But you’ll see from the unfolding story below, that as the tools, skills and access have changed, GreenNet continues to play a role in supporting social justice movements in their use of communication technologies. 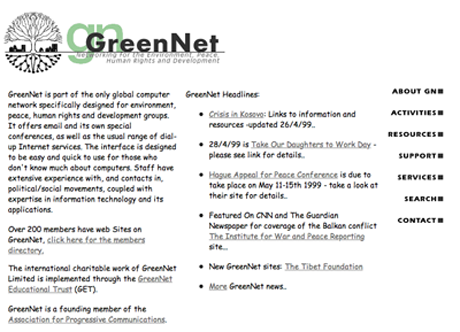 “GreenNet scored top rating in all categories and is voted as the best buy, followed by Poptel and WorldOnline.”

“Congratulations to Association for Progressive Communications (APC), on their Electronic Frontier Foundation (EFF) 2015 Pioneer Award. Executive Director Anriette Esterhuysen and the APC have been honored with this well-deserved award tonight for their decades-long work leveraging the Internet to support the causes of peace and justice, the environment, open source and access, and human and Internet rights, around the world.

I had a small part in the formation of the APC back 1986 when I suggested we should organise a concert to fund the creation of a global peace network and the University for Peace. I called up my old friend Little Stephen and we hustled a number of musicians to accompany us to a very cold stadium in Tokyo for the Hurricane Irene concert. This concert was a catalyst for the formation of the APC, which it helped to fund and was initiated by Mark Graham, Mitra Ardron and Danny Schechter. For the past several decades, APC and its members organizations have played a leading roll establishing the first internet service in many countries, creating and promoting the first Internet Rights Charter, and helping individual activists, NGOs, and UN organizations and events harness of the power of the Internet as a force for positive change in the world.”

Our long running legal challenge to GCHQ hacking reached the European Court of Human Rights, and was recognised as a potentially precedent setting case.

GreenNet left Development House after many years, and moved to The Green House, down the other end of Hackney Road, another Ethical Property establishment.

We joined CoTech, a co-op of tech Co-ops, and the East End Trades Guild

As the pandemic arrived in UK we headed for home, we supported our customers by rolling out a selection of open source online comms tools